This beautiful primitive masterpiece depicts a humoristic carnival scene (Rara) on the streets of Haiti singing and dancing long live Duvalier.  It is a 20"x24" oil on masonite.

Self-taught, Haitian primitive master, André Normil was born in Haiti in 1934 and died on May 2, 2014. He started to paint in 1944 at the Centre d'Art. He paints Haitian life daily scenes with keen observation and humor. His animal scenes are rich in colors. His primary colors, composition, and techniques are among the best in Haitian art. His works are a must for a serious collector. His name is cited in many Haitian art books. "Like Bigaud, Normil depicts scenes of daily life with a certain humor". (Peintres Haitiens by Gerald Alexis). Get the Book in English Now!

Own a piece of art by this master painter? Each piece is unique. Get a professional estimated market value of yours for whatever purposes  (Selling, Insurance, Donation..) Now! How Does It Work?

The info below is from Wikipedia: Did You Know?

Rara is a form of festival music that originated in Haïti, that is used for street processions, typically during Easter Week. The music centers on a set of cylindrical bamboo trumpets called vaksen (which may also be made of metal pipes), but also features drums, maracas, güiras or güiros (a percussion instrument), and metal bells, as well as sometimes also cylindrical metal trumpets which are made from recycled metal, often coffee cans. The vaksen-s perform repeating patterns in hocket and often strike their instruments rhythmically with a stick while blowing into them. In the modern day, standard trumpets and saxophones may also be used. The genre though predominantly Afro-based has some Taino Amerindian elements to it such as the use of güiros and maracas. 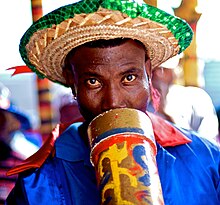 The songs are always performed in Haitian Kreyòl and typically celebrate the African ancestry of the Afro-Haitian masses. Vodou is often implemented through the procession. The genre was imported to the Dominican Republic and is now an integral part of the Afro-Dominican music scene, where it is known colloquially as gagá.[1] In the Dominican Republic, the music is often played by the Afro-Dominican population as a cultural tribute to their African ancestors in the same manner as their counterparts in Haiti. Rara in Haiti is often used for political purposes, with candidates commissioning songs praising them and their campaigns. Rara lyrics also often address difficult issues, such as political oppression or poverty. Consequently, rara groups and other musicians have been banned from performing and even forced into exile—most notably, folk singer Manno Charlemagne who later returned to Haïti and was elected mayor of Port-au-Prince in the 1990s.

"The Rara festival most likely developed during the period of colonial slavery, when enslaved Africans and Afro-Creoles in the colony of Saint-Domingue were said to parade with drums and instruments on Easter Sunday. There is also some evidence that troupes of maroons marched with drummers, horns, and singers, similarly to Rara."[2]

Since the 1990s, Haitian Americans have been performing Rara in New York City's Prospect Park in the summer on Sundays. [3]